A Vet’s “Tail” about Cancer in her Canine Best Friend 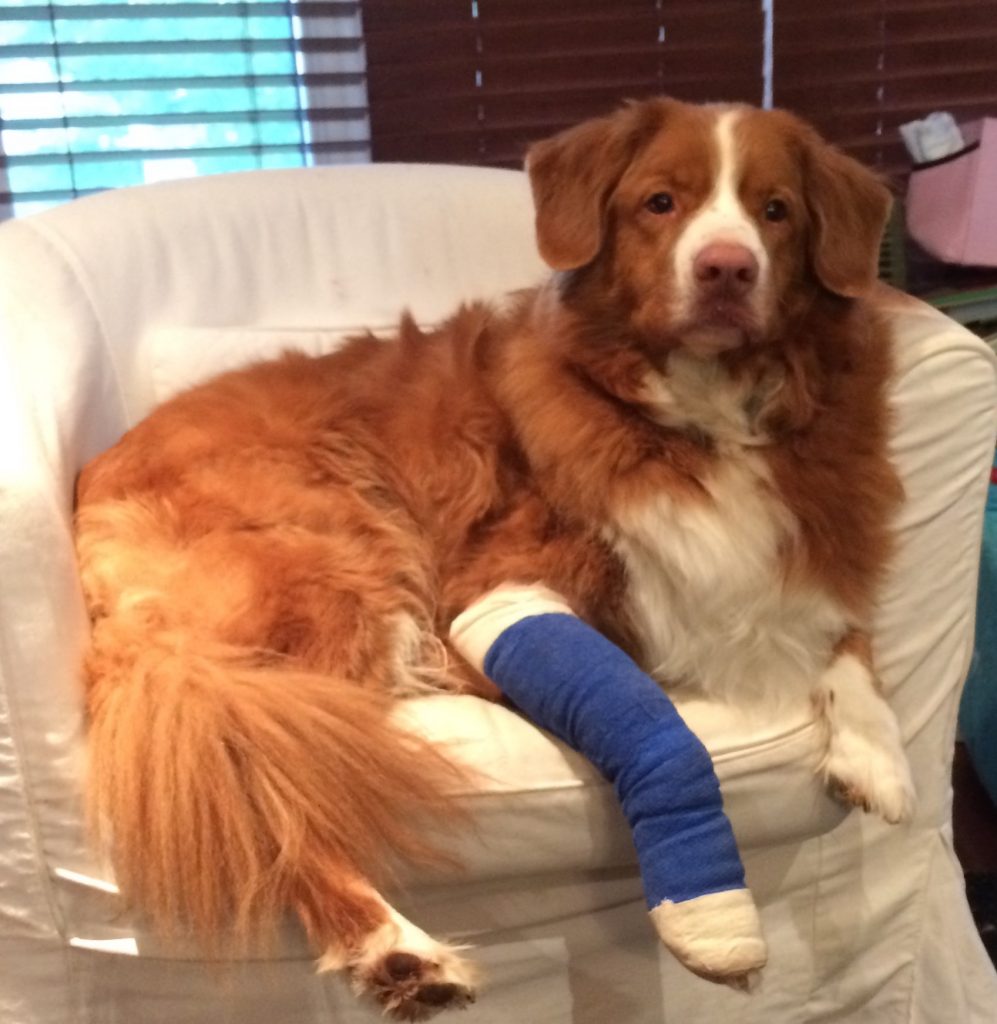 Low-grade mast cell tumour.  No tumour-free margins.  That’s how this all started back in January 2013.  I was pregnant with my little girl when I found out my fur-baby, Indy, my beloved 4-year-old Nova Scotia Duck Tolling Retriever, had cancer.  Looking back, I was devastated – Indy had to live to meet the newest member of our family.  I mean, really, of all the different types of cancer, mast cell tumours are not a bad one to have.  Generally, they’re amendable to being surgically removed, and low-grade mast cell tumours don’t tend to spread.  But as a pet owner, all rational thought left my brain, and my educated veterinarian brain was left silenced.

Because the tumour was not completely removed during surgery, I elected to pursue chemotherapy with Indy.  Now I know what you’re thinking – chemotherapy is horrible and it make them sicker and it’s too hard on them.  Honestly, Indy did great and so do the vast majority of dogs and cats that undergo chemotherapy.  We did a total of eight chemotherapy treatments – four consecutive weeks then four treatments spaced two weeks apart.  There was never a missed meal, never a bout of diarrhea, and he was as playful as ever.

I have monitored Indy pretty closely over the last three years to make sure that I investigated every new lump that has come up, and trust me, there have been a lot!  At the end of September, 2016, I found a lump close to his original mast cell tumour site, and a fine needle aspirate came back consistent with mast cell tumour.  We had been through this once before so I knew we could do it again.  Off we went to the oncologist and surgeon to see what their thoughts were on removing the tumour again.  While doing an abdominal ultrasound to look for any spread, another mass was found in his jejunum, part of the small intestine.  I chose to have Indy go to surgery again, with the plan of removing the intestinal mass and removing as much of the mast cell tumour on his leg as possible.  How could I not??  He has been such an amazing companion, beyond stellar with my rambunctious children, and the most patient Toller around.  He and I have done a lot together, traveling hundreds of kilometers competing in obedience trials, and he comes to work with me almost every day, lying in his bed waiting patiently for me to finish writing my records or making phone calls, sometimes hours after I was supposed to be done and gone.  Not pursuing a diagnosis on exactly what that tumour in his gut was would mean I had given up on him, thrown my arms in the air and said “Ah well, he’s had a good life.”  But I just couldn’t do that to him.  He’s been too good a dog, comopanion, friend for that.  I had to try.

The pathology report came back that there was narrow but clean margins from the mast cell tumour.  The intestinal mass has come back a bit unusual, with the pathologist unable to make a definitive diagnosis even after special staining was done on the slides.  That mass is likely a fibrosarcoma or a peripheral nerve sheath tumour, both of which have an unknown prognosis based on the fact the tumour came from his jejunum.  Indy will be starting low-dose daily oral chemotherapy designed to stop the tumour from attracting blood vessels to itself and therefore slow its rate of spread.  He will be monitored with ultrasounds on a regular basis.  We’ll take each day as it comes.  For now, Indy has no idea anything is wrong: he still barks at the mailman as he passes by, and still steals the cat’s food.  And that’s the way we like it.